A monomaniacal passion for optical perfection.

This phrase defines every action at GUNNAR. Our motivation? Human limits. Our Mission? Expand our visual limits.

Data streams at faster and faster rates everyday. From computers to phones, workstations to digital devices, torrents of information radiate outward in accelerated visual waves. Our eyes, however, are not biologically engineered for relentless hours of digital data and artificial light. GUNNAR is founded on one principle: Expand visual limits for our digital generation and beyond.

was born out of one woman’s concern for her husband’s computer migraines and worry about the eyes of her child who was fascinated by technology. Jennifer Michelsen’s husband, Matt, was suffering from severe headaches after hours sitting in front of computer screens. The headaches were a symptom of Computer Vision Syndrome and Digital Eye Strain, a collection of symptoms including headaches, blurred vision, eye strain, neck and back pain. They reached out to Joe Croft, a former product engineer at Oakley, to find a solution. Together, Croft and Michelsen set out to create a product that address issues associated with digital eyestrain. They completed their first prototype in 2006. In early 2007, they founded the company and in October of 2008 they launched their first product.

As Jennifer urged her husband to see a doctor, she wondered whether her young son, Gunnar, would face similar issues. If she and her husband believed the computers were becoming an issue – what would happen to Gunnar’s generation that began using devices at an early age? An estimated 125 million Americans suffer from what is now commonly referred to as Digital Eye Strain or Computer Vision Syndrome (CVS), according to the American Optometric Association.

The Michelsen’s and Joe Croft decided to further research the issue of CVS. They wanted to learn more about the effects of focusing on a digital image projected on a screen just inches from one’s face for hours at a time and years on end. The Crofts and the Michelsens began their five-year road to launch by talking to medical experts. One of those experts was Dr. Jeffrey Anschel, a Carlsbad optometrist who has become an expert in Computer Vision Syndrome and Visual Ergonomics. He noticed the problem about 17 years ago when employees of a nearby computer company began complaining about dry and tired eyes and difficulty focusing.

They were problems that people generally didn’t experience until they were in their 40s, but these patients were in their early 30s. It didn’t take him long to make the connection between their work and the required time spent in front of a computer screen. “You can work, shop, communicate and do just about everything from your computer now, and people just don’t realize how much time they’re spending looking at the screen. The digital images that computers project are one factor contributing to Computer Vision Syndrome. The eye focuses on the hard edge of an image, but digital images don’t have a clean edge. As a result, the focus drifts forward and back, causing eye fatigue.” Anschel also noted, “that when people spend long periods focusing on something close to their face, eye muscles tend to lock into a singular position, which is tiring and can push the eye down the path to becoming farsighted. Meanwhile, the eye has to deal with light from conflicting sources, such as sunlight, that are much brighter than the computer screen. There’s also glare from the light shining into the eyes. And the angle of view for the computer screen, which is straight ahead, isn’t desirable. People tend to focus better at objects when looking down, such as reading a book.”

Croft and Michelsen eventually took a prototype to Anschel and explained the important components of the glasses. They had amber-tinted lens, which make images appear clearer. Yellow makes images sharper by adding contrast and filtering out blue light. The lens is also shaped to pre-focus the light into the eyes, so the eyes don’t have to do all the work. There’s also an anti-glare filter that allows light from the computer in but keeps out distracting reflected light from other sources. The lenses are also designed to be fitted close to the face, creating a “micro-climate” that keeps away the dry air currents. This helps keep eyes moist by reducing squinting and maintaining a closer-to-normal rate of blinking – a leading cause of dry eyes.

Croft and Michelsen set out to create a product that addresses the issues associated with digital eye-strain. They completed their first prototype in 2006. In early 2007, they founded the company and in October of 2008 they launched their first product. Investors include 50 Cent, Peter Thiel and Monster, Inc. Retail customers include Amazon, Best Buy, Fry’s, GameStop, and Staples. Corporate customers include Facebook, Google, Microsoft, and Zappos. 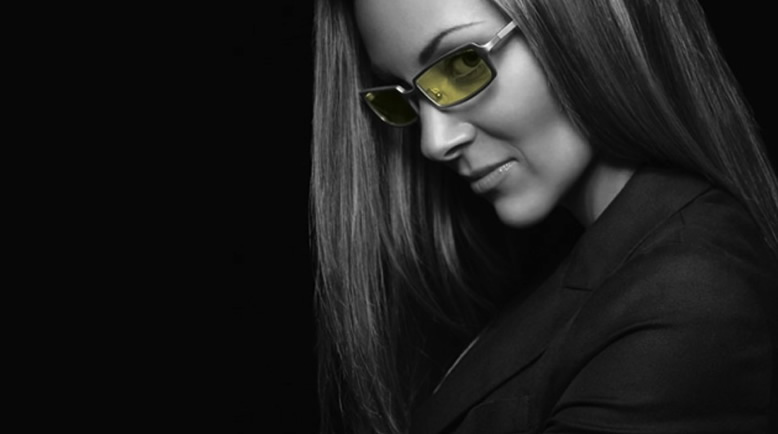